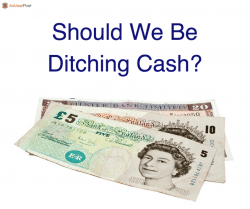 Should We Be Ditching Cash?

Apple Pay has now arrived in the UK. Paypal has now outgrown eBay. Visa Europe is said to be in talks to be bought back by its larger sibling Visa Inc. In short, digital payment systems are big business in every sense of the phrase.

Notwithstanding this, cash is still very much a part of life around the world. Is it, however, headed the way of the penny farthing bicycle?

Certainly there has been a push against cash in recent times. A UK MP has already suggested paying benefits on restricted-use payment cards.

The Danish government is considering allowing retailers to refuse to accept cash for payment. Meanwhile the French government has lowered the amount vendors are legally allowed to accept in cash for any single transaction.

Let’s look at three areas which concern us all and see where cash stands against digital payment methods.

Some of these purchases penalize those who want (or need) to pay with cash. For example, pay-as-you-go utilities are notoriously more expensive than other tariffs.

Of course, there are still plenty of purchases where it is possible to pay with cash. In fact in the face-to-face environment, there are some places which essentially penalize people for paying by other means. Some retailers (generally smaller ones) put surcharges or other fees on card payments. Others insist on a minimum transaction amount before they will accept card payments. Some retailers only accept cash. The march of the payment cards, however, continues and shows no sign of slowing.

Cash is essentially an anonymous payment method. This makes it an attractive target for thieves. The means by which people can be relieved of their cash vary from subtle pickpocketing to brutal mugging and armed robbery. As with all violent crimes, the victims can experience lasting psychological shock and/or physical injury or even death.

Digital payment methods (such as payment cards) can be traced back to their owner. This reduces their attractiveness to traditional thieves. They can, however, become a target for fraudsters. Fraudsters aim to gain access to online bank accounts and digital payment methods to use them for their own purposes. If they succeed, the consequences for their victim can range from mild inconvenience to full-scale ID theft.

So the question becomes: “Overall, is online banking safer than using cash?”

Individuals can also take steps to protect themselves by running security software on internet-linked devices. This includes phones and tablets as well as computers.

To begin with, “cash-in-hand” transactions have become strongly associated with tax evasion. Given that it is tax revenue which funds the police and armed forces, its loss could quite reasonably be considered a security issue.

Similarly cash provides a straightforward method for under-the-counter transactions to take place. For example, shoplifted goods can be sold face to face for cash. Admittedly they can also be sold online, via portals such as Gumtree and eBay, but that does at least create some element of traceability.